How are we to understand the Bible? I believe that this is one of the most important spiritual questions that a Christian can possibly ask. Jesus said that whoever follows him will not walk in darkness, but will have life’s light. I submit that this could not be true if there were not a reliable, even infallible means of interpreting Scripture, a method that, if followed in contrition, could not possibly fail to lead us to the heart of God in Christ.
How are we to interpret Scripture? According to Catholicism, there are four levels of biblical interpretation. The first is the literal sense. It is the most basic, and according to Aquinas, the level upon which all others are built. The second is the moral sense. There are lessons for growing in the virtues in Scripture, since genuine moral transformation and growth is implied by the doctrines of justification and sanctification. We cannot be justified (declared righteous) unless we actually are, and we are not completely sanctified (holy) until we achieve moral perfection.
The third level is the typological (analogical) sense. St Paul uses this sense when we says that a rock in the Old Testament is Christ, or when he says that Hagar represents those under the Torah. Finally, the fourth sense of Scripture that Catholics believe in is the anagogical sense. (The anagogical and analogical senses of Scripture are distinct.) This level of meaning pertains to the realities that will be made manifest at the end of time in Heaven and Hell. For example, Psalm 23 could be interpreted anagogically as referring to the heavenly banquet around which the saints and angels will feast for all time.
According to Catholicism, the meaning of Scripture cannot be limited to its literal interpretation. There are the other three deeper levels that can be found throughout Holy Scripture, and to ignore their import would be inappropriate.
One might contend that if Scripture has more meaning than the literal sense, then there will be an endless dispute between Christians about what all of the different meanings are. This is one of many reasons why Catholics insist on the existence of an infallible teaching authority in the Church, namely, the Magisterium. The Roman Bishop (i.e., the Pope) and the Bishops in communion with him throughout time are able to pronounce definitively upon the content of the Christian faith. They do so most especially in the canons of the Oecumenical Councils. (Catholicism affirms the existence of Twenty-one such councils. Also, it is important to note that the charism of infallibility is not understood by Catholics to mean that everything that a given Pope or Bishop thinks is always correct. Rather, the concept of infallibility emerges across time and place in the doctrines that are proclaimed by the Pope and the Bishops in communion with him as universally binding doctrines pertaining to faith and morals.)
Because of the Magisterium, Catholics can have confidence that Scripture will always be intelligible to the Christian faithful. There is no risk of doctrines being hidden or lost, as the Holy Spirit speaks through the Magisterium all that is necessary to grasp the true meanings of Scripture.
Ironically, it is when the other layers of biblical meaning are denied that we become slaves to a hermeneutic of relativism. In an exclusively literalisric hermeneutic of Sacred Scripture wihout an infallible teaching authority that is capable of clarifying the correct interpretations of the Bible through councils, bulls, and encyclicals, we are forced to guess in a system of conjectural psychology what we deem the original authors of Sacred Scripture literally thought when they wrote, say, Second Isaiah, or the Gospel According to Matthew. It is the literalist schema and not the multilayered Catholic doctrine that runs the greater risk of producing eccentric, subjective, and misleading interpretations as Scripture.
Armed with the realism and the genius of the Catholic doctrine of Scripture, we are able to approach the text for what it was always meant to be: an immaculate mirror of our God and Savior Jesus Christ. 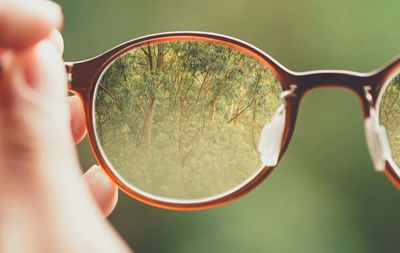 A Matter of Transparency