Recently Father Richard Rohr, a Franciscan priest and spiritual guide offered this as a reflection on the Apostles and Nicene Creed,

“Both creeds reveal historic Christian assumptions about who God is and what God is doing. They reaffirm a static and unchanging universe and a God who is quite remote from almost everything we care about each day. Furthermore, they don’t show much interest in the realities of Jesus’ own human life—or ours. Instead, they portray what religious systems tend to want: a God who looks strong and stable and in control. No ‘turn the other cheek’ Jesus, no hint of a simple Christ-like lifestyle is found here.”

Earlier in his reflection he was concerned about the “Great Comma” this supposed gap between the incarnation of Jesus and Jesus’ death. Rohr correctly notes that neither of the Creeds address Jesus social teaching, no summation of the Sermon on the Mount, no leave you offering and go reconcile with your brother or sister, and it fails to address what type lure to use while fishing.
Rohr’s criticism is shocking at its lack of understanding about how and why the Creeds were developed.
So what are the Creeds and why were the Creeds developed?
The word creed is derived from a Latin word which means “I believe” or “I trust.”
It is important to note that any statement of belief is a Creed. For Judaism their creed is, “‘Hear, O Israel: The Lord our God, the Lord is one, and as for you, you shall Love the Lord your God with all your heart, with all your soul, and with all your strength.’” This is the core statement of belief for Judaism.
The Easter proclomation, “He is not here, he is risen.” is a creed.
Even the Restoration Churchs’ statement, “No creed but Christ,” is a creedal statement.

As the early Christians reflected on Jesus’ teachings and actions questions arose about the relationship between Jesus and the God whom Jesus called Father. Are they equal? Is one subordinate to the other? And what do we do with the Holy Spirit?
Christians argued about whether Jesus was a human being or whether he only appeared to be a human being. Was Jesus God? Or did he only appear to be divine?
Some of you may ask, “What difference does it make?”
Stanley Hauwerwas in Heresies and How to Avoid Them writes,

“Orthodoxy can tempt us to self-righteousness and a protectiveness that betrays the joy and confidence that should be at the heart of the gospel.”

He goes on to write that orthodoxy is not something that is proved rather it is something that is prayed.
Rachel Held Evans describes the creeds as the story she is going to wrestle with for the rest of her life.
I offer these two statements as a lens for how I see the creeds, not as an insufferable bore to beat us into submission, but a liberating and joyous proclamation.

The two primary creeds used in church are the Apostles’ Creed and the Nicene Creed. In my own tradition the Apostles’ Creed is used at baptism, at funerals, and in our daily prayers. The Nicene Creed is used on Sundays and major Feast Days.
They are not meant to be the total of the faith but they are central to the faith. They express a trust and belief that Christians have proclaimed for centuries. They are universal in that the historic Church proclaim their trust in the God whom the creeds point to as well. It is for this reason that the creeds are inclusive and important. Inclusive because they are universal and all encompassing. And important because they help navigate the way we talk about God and faith.
There is both a conservative and progressive concern about the creeds. Some conservatives see the creeds as Romish and detract from Holy Scriptures that they believe are the central identity of faith.
Progressives see the creeds as too specific about God. If God is Trinity then what about non-Trinitarian faiths? Some see the creeds as a creation of patriarchy and a tool of oppression. But many of them don’t believe the creeds. They do not believe that Jesus was born of a virgin, was raised from the dead, or will come again to set the world right. They see the creeds as a roadblock to faith and muddling Jesus’ real message, be excellent to one another.

But I would suggest… 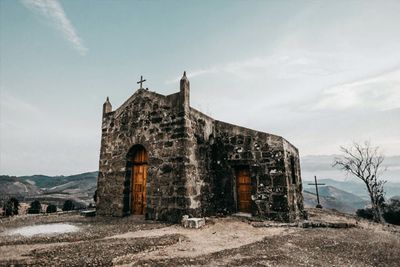 Why are the Faithful Falling Away?

Pick Up Sticks, Pluck Off Grain