The Redemptive Work of Silence: Advent

As we progress through this season of Advent, I have found the need to pause for a moment and think about silence as it relates to the incarnation. It’s not a difficult connection to make. Only this morning two of the carols we sang in church referenced silence directly:

“How silently, how silently the wondrous gift is given!
So God imparts to human hearts the blessings of his heaven.
No ear may hear his coming, but in this world of sin,
Where meek souls will receive him still the dear Christ enters in!

“Why lies he in such mean estate, where ox and ass are feeding?
Good Christian, fear for sinners here - the silent Word is pleading!

These two verses perfectly drew on the themes I had been mulling over these past few weeks. God has a wonderful tendency to answer our prayers silently, sometimes far in advance, even before we begin to ask, sometimes long after we’ve given up asking

I think of Exodus 2, when Moses, the deliverer, is born into slavery and delivered into the safety of Pharaoh’s house amid the genocide of an entire generation of his people. It would be another eighty years before he would stand before a new Pharaoh and say, “Let my people go.” At the end of the same chapter, when Moses has fled to Midian and will spend another forty years as a shepherd in the wilderness, is when we’re told that the Israelites cried out for God to rescue them. That means they had another forty years of groaning and hard labor before the deliverer God had set apart forty years beforehand would be revealed and rescue them.

I think of Daniel 9 and 10, when Daniel prays for mercy for his people and for understanding concerning the visions he’s seen. In chapter 9, it’s while Daniel is still praying that Gabriel appears and says to him, “O Daniel, I have now come out to give you insight and understanding. At the beginning of your pleas for mercy a word went out, and I have come to tell it to you, for you are greatly loved.”

But when Daniel prays in chapter 10, he receives the vision and then three weeks pass before Gabriel appears to him, leaving Daniel to fast and mourn during that time because the vision was grievous to him. When Gabriel does appear, he says this:

“O Daniel, man greatly loved, understand the words that I speak to you, and stand upright, for now I have been sent to you. […] Fear not, Daniel, for from the first day you set your heart to understand and humbled yourself before your God, your words have been heard, and I have come because of your words. The prince of the Kingdom of Persia withstood me twenty-one days, but Michael, one of the chief princes, came to help me, for I was there with the kings in Persia, and came to make you understand what is to happen to your people in the latter days. For the vision is yet to come.”

In both stories God’s answer is established long before it is heard by the people who cried out. For the Israelites in bondage, their answer is delayed because their deliver needs to grow into maturity, he needs to be a shepherd in the wilderness for forty years before he can… well… be a shepherd in the wilderness for forty years. For Daniel, the answer is sent out immediately from the time of his cry, but dark spiritual forces delay its arrival. There is a reality that we as God’s people receive both guidance and encouragement from God and opposition and discouragement from his enemies. We can’t always know why God’s answer is revealed in the time that it is, but we can trust that his answer will prevail in the goodness and fullness of time.

So I am very encouraged as I think on these things during this Christmas season. We cannot always recognize how God is working as he is working. Many times it is only with much retrospection that we can begin to see how God was orchestrating our rich welfare through every delay, disappointment, and destructive force that we had to endure. How good it is to know that even in the silence, “the silent Word is pleading,” and that Jesus continues to make his home with the meek and the lowly. How good it is to know that one day the Word will sound out irrepressibly and Jesus will call the meek and lowly to stand with him in his glory.

The Podcast is Back with Season 2 Feb. 4th 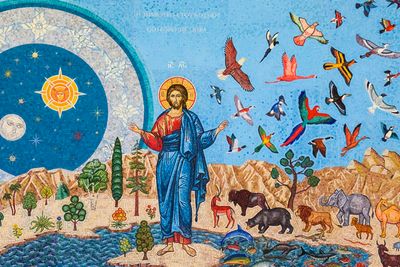