Veneration of the Theotokos as Feminist Expression (Brad Jersak) 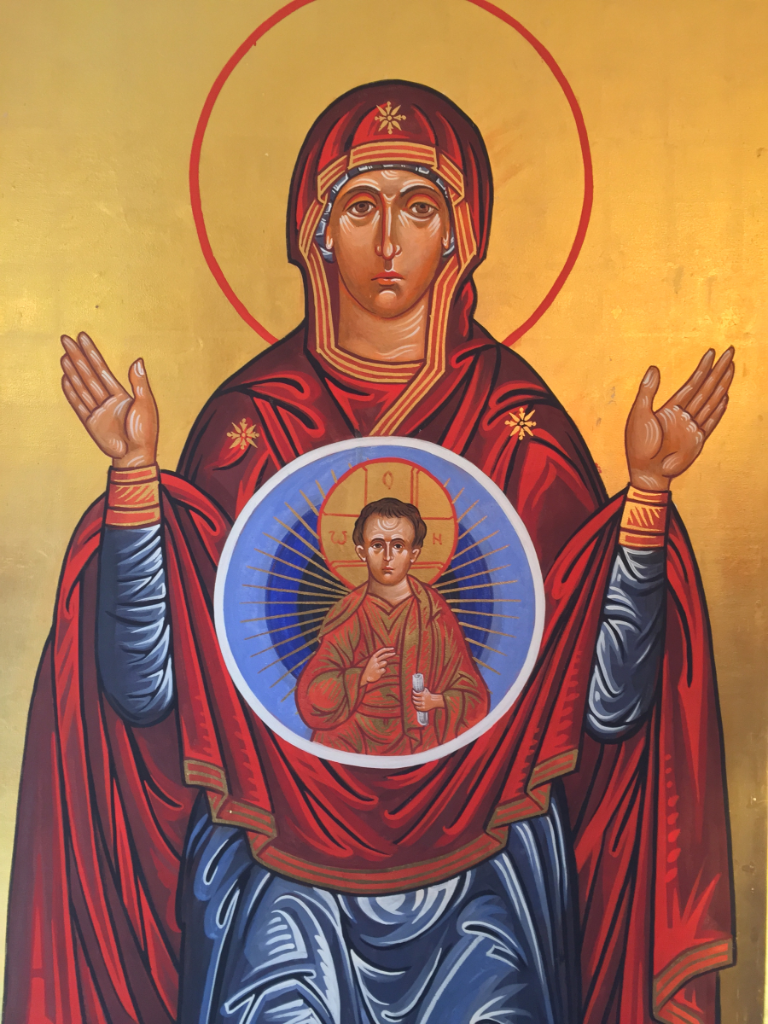 This blog past was originally published by Brad Jersak on Clarion Journal, and can be accessed here:
https://www.clarion-journal.com/clarion_journal_of_spirit/2017/08/veneration-of-the-theotokos-as-feminist-expression-brad-jersak.html
*******************************************************************************
To feminist critics of Orthodox patriarchy, I hear you. While we have female saints, apostles, evangelists, prophets, pastors, teachers, parish council chairs, chanters and finally (after too many centuries) a deacon in one jurisdiction, it is true: we still don’t ordain priests. For some, this is a line in the sand. One that delayed my chrismation for many years. One I can’t change. I am sorry.
But there are two things I can do as an Orthodox feminist:
1. I could commit to rising no higher in the hierarchy than is allowed women. I could willingly make their ‘glass ceiling’ my own. I am praying about that. Not that anyone decides on their own ordination in Orthodoxy. Not that Orthodoxy is about power or title, but the downward mobility of servanthood. Not that I could ‘advance’ further anyway since my wife has chosen not to become Orthodox. So I suppose it’s a moot point, but perhaps an important statement for those with objections. If your feminism prevents you from embracing Orthodoxy, you could simply commit to solidarity with the women who faithfully serve (in the ways listed above) as they do now, and more importantly expunge ambition from your heart for title and power beyond what is allowed women. Not that we’re protesting. Not that we’re recruiting. So, be at peace. We are.
2. Now this might sound cheeky, but I can also challenge my Protestant feminist friends to engage in a far more revolutionary act of feminism than they are used to–one common to Orthodoxy. Namely, the veneration (not worship) of the Theotokos (the Virgin Mary). I know the standard objections, and I also know by experience that they are often based in mistaken assumptions and ignorance.
But here’s the thing: criticisms of Orthodox patriarchy ring a bit hollow from feminists who don’t or won’t honor the woman who bore God the Son in the temple of her womb and whose words the Gospel records: “…from now on all generations will call me blessed.”
St. Basil the Great (4th century)–brother and student of St. Macrina the Younger, the great (perhaps greatest) female teacher, the theologian behind ‘the Holy Hierarchs’ who gave us the Nicene Creed–wrote this hymn to Mary, which I gladly sing as an Orthodox Feminist. Would you?
“All of creation rejoices in you, O full of grace: the assembly of angels and the human race. You are a sanctified temple and a spiritual paradise, the glory from whom God was incarnate and became a child; our God, existing before all ages. He made your womb a throne, and your body more spacious than the heavens. All of creation rejoices in you, O full of grace. Glory to you.”
In singing “glory to you,” we do not steal glory from Christ. We are praying that Christ would glorify his mother, as promised to all the saints (in Romans 8) and acknowledging that, in fact, he already has, to our great joy. For she is the firstfruits of all those who willingly bear Christ in this world, with the prayer “Behold, I am the servant of the Lord; let it be to me according to your word d.”
Some will no doubt remind me that it’s one thing to venerate the dead while marginalizing the living. I completely agree. We should NEVER marginalize any living woman. And to that point, Mary is a living woman–we believe in the resurrection. So how is it that feminism critiques Orthodox patriarchy (as it should) while marginalizing the greatest living (still) woman in history? I can think of no greater misogyny–or irony. It’s too easy to despise the all male priesthood while refusing to join them in venerating the mother of God Incarnate. It feels like a case of needing to pull the plank from one’s own eye.
Yes, singing and bowing and kissing an icon of the Virgin Mother is uncomfortable to those who’ve been conditioned to believe it is an act of idolatry rather than an expression of deep affection and appropriate honor that I offer my own dear mother. So, for conscience sake, I can be gracious: my Protestant feminist friends need not participate. It is enough that you would pray for us–for God, in his mercy, to open our eyes to our misogyny, as we do for you. But be aware that your Orthodox friends take this form of feminism–veneration of Mary and all female saints–ver seriously, including especially the feminist Patriarchs among us.
The link has been copied!
Newer post

Is the Bible an authority?